Finally I got around to finishing the anime adaptation of the otome game Norn9 Vars Common, and the first thing I want to throw in is this: adapting the game into a 12-episode anime is very daring. But they did a good job.

The biggest risk is probably the fact that it will turn into another OreTsuba, where you have way too many routes, so the focus is all over the place, and the story doesn’t start to make sense until all the watchers were already scared away. And I think that’s what happened to Norn9.

Second biggest risk is that they anime will have the same nonsensical elements like the game (according to summaries I’ve read.) You need to have the mindset to ignore everything and just enjoy the show.

Summary: Koharu has always lived alone, and was told that when she hits seventeen, go board a ship called Norn. The year is apparently somewhere around WWI, but there is a huge modern looking ship in the sky that seems impossible for that era. On the ship are a bunch of teenagers who are espers, brought together by an organization called “The World.” Thus begins Koharu’s journey of self-discovery and saving the earth.

My favourite thing about Norn9 is that it’s ambitious. In contrast to other Otoge adaptations, Norn9 has a huge main plot that underlies all the routes. We also have heroines who are strong in their own ways: the sweet and kind Koharu (I find her very cute), the badass ninja Nanami, and the no-damn-given ojou-sama Mikoto. Compared to bitchy Tamaki from Hiiro no Kakera, deadfish heroine from Amnesia (I call her Maria), doormat Yui from Diabolik, or still-faced Felicita from Arcana Famiglia, we have a variety of fun interactions between them and the boys. It isn’t bad. I already like Norn9 for actually having a plot and sticking to it.

As I have not played the game, my knowledge of what happened in the original is limited to information I found online. Instead of having Sorata and Koharu in the prologue, the anime opened with just Koharu getting on the ship. I think the first episode was well made, it established Koharu and Kakeru as the main couple and skimmed over the other characters which the viewers expect to get to know later on in the story. Downside is that Sorata is now non-existent. Even though he’s supposed to be this big guy who started everything, they left him in the shadows so much he seemed like an easily replaceable extraneous character nobody cares about. 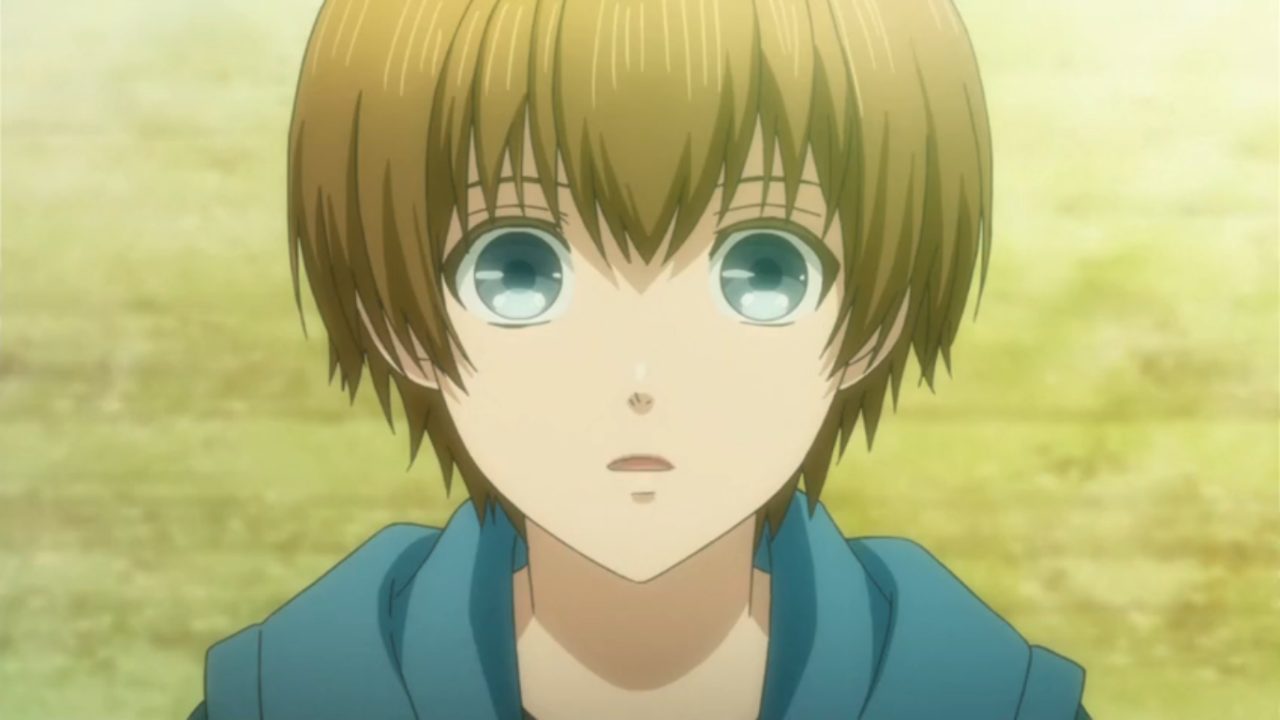 You don’t have to be surprised I don’t remember you.

Second thing I would like to mention is the number of characters. This game is similar to OreTsuba in that they have 3 protagonists that have their own routes. OreTsuba only has a route or two per guy, but Norn took it to another level. Norn9 has 3 strong heroines, 3 guys per girl, and that makes 9 routes, a hell lot more than the average 3-6. (I heard there was a Sorata route?) The producers did a good job of scattering airtime around to the main heroines and her husbando(s), and tying in the plot points that each character holds. Still, sometimes an obsolete character would turn out to have this huge role that leaves me going: wtf you never hinted this (or I just didn’t catch it). And some people (like Heishi) just ceased to exist.

Plot drivers appearing like a filler episode is one of Norn9’s weak point. Here we have the dream (which I found out later that it’s Itsuki’s abilities to control dreams) which appears to be nothing more than fanservice but it forges this connection between our protagonists that affect the events that follow. We also have a haunted house event, totally looks like a filler, that led them meeting one of the key character, Aion. I desperately wished Norn9 isn’t another Arcana Famiglia (fortunately it isn’t), but one thing they have in common is that they open with this big plot, then went on and on with filler episodes, then slap it back in again. Norn9 is way more focused than Arcana Famiglia, but that’s the feeling I got. It just felt all over the place.

I’m glad that by the eighth episode, they pulled everything back together and progress with their big revelation (finally). After that you get four episodes of solid story. Even though some parts left me squinting at the screen wondering what I missed, it was pretty enjoyable.

One issue I had is: why do they need to have powers in the first place if Aion’s just going to take it back and use it for the Reset? Do they need memory wiping powers to grow vegetables and catch fish? Sure, it made the story so interesting in the beginning but then when you get to the Reset part, having powers only to get it taken back is sort of pointless. You might argue that they need it to protect the ship, but hey, Aion isn’t stupid. She could do that too! Hold it temporarily so nobody could get to it? What if people started killing the residence of Norn instead? Isn’t keeping powers with people more dangerous that way?

Fangirl corner: I’m glad our main couple, Koharu and Kakeru, aren’t the average otoge couple. Usually you have a nice heroine paired with a jerk, but these two are so cute together you can’t help but smile. Personally, Mikoto got the best dudes (and she’s the second most important person in the story after Koharu). Nanami got the short end of the stick with Ron and Heishi, but Akito is just a sweetheart. The guys that aren’t cannon ended up being besties with one another, which is a good way of making them appear less of an extraneous character.

One last thing before we move on. I like how the anime does not rush through the last few episodes like many tend to do. They have plenty of time to get the main story unfolding and managed to wrap everything up nicely. Poor Sakuya though, the love of his life just ditched him for another man.

Heck yeah Yanagi Nagi. Her voice is beautiful as always, and she voiced Aion, the actual heroine of the story (I guess).  She also sang the insert song, the original opening of the game, and the opening of the anime. Nemuri no Kuni is just beautiful.

The ending song, Zero Tokei, ended up being my favourite song from this series. Not once did I skip it while watching.

There were also a whole lot of cool soundtracks.

I’m never picky about art unless they are absolute crap, but the artwork in this anime is beautiful. So beautiful I can cry.

That boy who got ignored for pretty much the whole series, that’s who. People say that if the story was told from his point of view instead of Koharu, it would be a more decent sci-fi story, but heck this kid never does anything but read all day! And Norn9’s whole focus is on character development. But do they need to completely bury him under a rug only to dig him out on the final episodes? No.

I believe in enjoying the experience rather than finding points to criticize on, so sorry if you think I give this show better credit than it deserves. Norn9 was quite enjoyable as an anime, not the best I’ve seen, but not the worse either. It is extraordinary for an otome game to actually have a story, not just the heroine sitting there being a doormat for the entire show.  Conclusion: watch it if you like shoujo and sci-fi.

Till we meet again.