“You know I’m not ashamed of the way I dress, Corrin. And I feel I should show that confidence and pride in public. The only way the world will grow more tolerant is to see people like me. …See us living, loving, and being both our unique selves and quite ordinary. When we’re not invisible, we can become part of the pattern—woven into the fabric.” – Forrest (Conquest)

My shipment of Fire Emblem Fates: Conquest arrived at the beginning of June. I didn’t expect anything beyond playing the bad guys who save the world, but it does offer a lot of elements that intrigues thoughts.

The Kingdom of Nohr is at war with the neighboring country, Hoshido. Corrin (Avatar) is a Prince/Princess of Nohr, raised in isolation at the Northern Fortress. However, things are about to change when he/she discovered that her real family is in Hoshido, and Nohr kidnapped her from them.

So when the war escalated, will s/he choose to side with her true siblings and betray the family who raised her for the greater good, or will s/he remain with her foster siblings in Nohr to change things from the inside?

Fire Emblem Fates is actually the title of 3 games: Birthrights, Conquest, and Revelations. After you have finished these 3’s shared chapters, you will get choices which will lead you to each of the respective games.

The only stuff I know before purchasing all games of Fire Emblem Fates is that Azura has a lovely voice, people die for good if you let them get killed in battles, and oh, you can pair people up to get married. I don’t really feel anything after finishing Birthrights, the easier parallel, but when I finished Conquest, I’m sort of impressed with what I saw.

In Conquest, it is possible for male Corrin to marry Niles (Zero), another dude in the army.

Boom. There you go. So apparently this is the first game I’ve heard of to do any same sex marriage, and out of your some 40 units you get in each game, only ONE of them will be able to marry someone of the same sex. In conquest, it’s Niles. If male Corrin does not marry Niles, he’ll not be able to have any other relationship with males, only females.

I played the female Corrin but kinda got married too early on in the game that I overlooked another important character: Rhajat (Shara), Hayato’s daughter. Like Niles, if female Corrin doesn’t marry Rhajat, that left her with only heterosexual relationships to pursue.

So because these two can get married to members of either sex, does that make them bisexual, or do they just have special attraction towards the MC? That’s a question I will not attempt to answer since there’s not much content to play with beyond the support dialogues. In those dialogues, in both my play through of Birthright and Conquest, there is no hinting at the two character’s sexuality aside from the big letter S that you can see if you’re playing as the same gender as them.

If you decided to marry Niles or Rhajat, they will always be in your private quarters sitting on your bed or kissing you like other characters would. The only difference is that you won’t be able to unlock Kana (your kid’s) paralogue and/or Nina’s paralogue (if you married Niles).

So what does that mean? Well, I’m not sure how the franchise will handle same sex marriage from here on. Including only two characters from their set of like… 50? 60? characters that are able to marry one person of the same sex is real small, and there’s not much content beyond the one S support dialogue you get. They seem to be testing the waters. If the reception is well, then we would expect to see the number of cast grow outside Niles and Rhajat.

Moving on to the subject of a controversy, in Conquest we meet a young lady called Soleil (Laslow’s daughter) who right off the bat flirted with women and seemed genuinely attracted to them, leading many to think she’s a lesbian despite Laslow saying “she has a good eye for both men and women”. In the end credits, it is said that she travels the land, seducing young woman on the way. According to the wiki, Soleil’s support dialogues with male characters just have them become friends instead of promising to marry in the future (sorry I wasn’t able to get her to rank S with anyone in time). I believe this might be hinting at her sexuality, but there are two males she could marry: the male Corrin and Forrest (whose outward appearance is that of a female) so that made it difficult to say anything about her. (Because of the game mechanism she can’t marry another female.) Is she a lesbian like those on Tumblr claims? Or do the developers just want to hint at it and be done with? Or is she the same case with Rhajat and Niles but not realized? It’s like the developers are clinging to a pole that says ‘money! market! don’t let people rage!’ and dipping their toes into a pool of ‘we need to expand our horizons! we need to embrace diversity!’

Speaking of the children in Conquest, I loved Nina (or Eponine). She is funny. She is a fujoshi. Like her father Niles, she had some lewd tendencies and love to watch men make out. An example would be in a support dialogue with Siegbert (Xander’s son) where she follows two men and cheered for them to touch each other before Siegbert jumped in on her. I don’t think I’ve seen any character in anime or manga that are like that (aside from Phichit, perhaps). Hurray for our pioneer of gay culture in Fates, Nina! 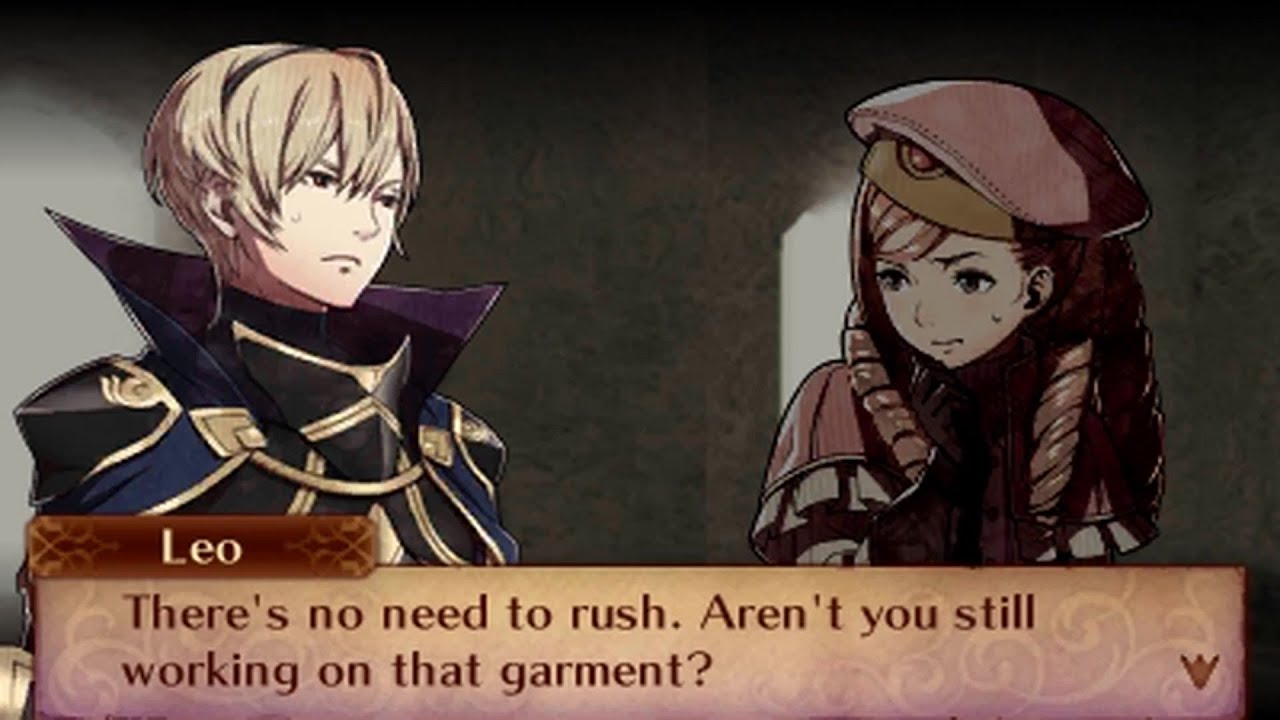 Finally, I’d like to mention the last person (again, from Conquest) called Forrest. At first I thought he was a transgender but actually he’s a cross dresser. He could only get S rank support with females, including Soleil and Rhajat. One of his quotes struck me as to where Fire Emblem is heading though: “ The only way the world will grow more tolerant is to see people like me.…See us living, loving, and being both our unique selves and quite ordinary. When we’re not invisible, we can become part of the pattern—woven into the fabric.” He said it all, right?

At first Leo, his father, does not approve of his habit of dressing as a woman. This is a real problem that many trans face around the world, and many are bullied or even worse for showing the public who they are. In Thailand (where I live), people are open to transgender, but different things could be said about their parents. A lot of them loved their child no matter what, but a portion thought of it as taboo and prohibits them from showing their real selves. Leo initially felt awkward with Forrest, but once he learned that his son just does what makes him happy, Leo finally accepts him without any further problem. Is Leo going to be a role model father, instilling new norms in society? I’d like to think so.

Fates was a really small step. Nintendo is still testing the waters to see how people would take it. Even though in Fates’ home country of Nippon, the number people who support same sex marriage to those who oppose it are fifty-fifty, that’s not nothing. Although two characters in Fates were a small step to embracing love, it was a step nonetheless. We just need to wait for new games and see how they handle it from there.