“I am an object in human form.”

If you’re a follower of redjuice-Guilty Crown’s character designer-then chances are you might have come across a blue-haired girl carrying a giant black coffin. That’s Lacia from Beatless, a sci-fi novel written by Satoshi Hase and illustrated by redjuice.

Described as a ‘human’ and ‘object’ boy-meets-girl story, Beatless tells the story of a fateful encounter between human Endo Arato and extremely advanced humanoid AI (called hIE) Lacia. For what purposes were these hIE, far more powerful than any human can comprehend, created?

Endo Arato: the protagonist. A young boy who is easily influenced by others. His father is an hIE researcher, while he is…*drumrolls* you guessed it, a high school student. His friends include an over-achiever inner circle boy called Ryo and a bespectacled hIE skeptic called Kengo. Has a sister named Yuka, who cares a lot for her brother. 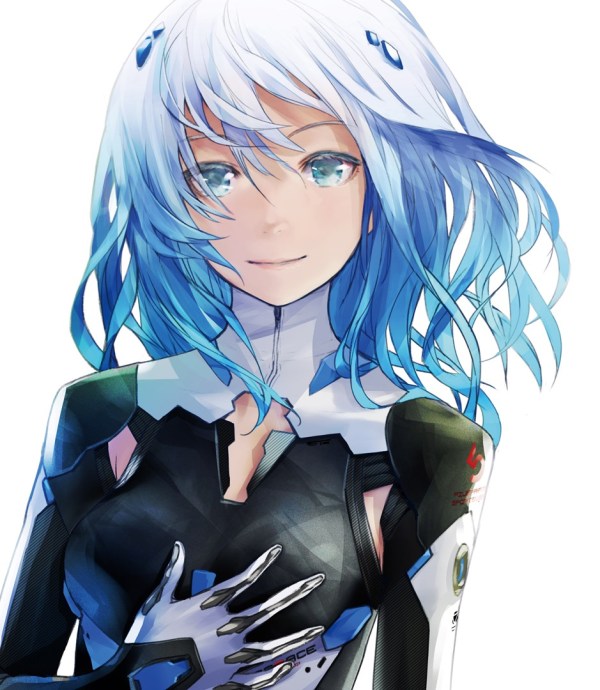 Lacia: the heroine, number 5 in the Lacia class. An extremely beautiful hIE runaway that now belongs to Arato. Her weapon is actually a portable quantum computer. Works as a supermodel. Yes, she is that girl you see on every promotional content. Kouka: a fierce fighter, first of Lacia class. That girl you see on every other promotional content. Snowdrop: “She rules evolution” – redjuice on his Deviantart.

Second in the Lacia class. An hIE with a mysterious vibe who can neutralize electronics with her nanomachines.

Mariage: Third of the class, an hIE who began a new life after escaping Memeframe’s research facility. “I trust in your smile. I won’t care whether you are soulless or not.”

AD 2105, hIE are the grease in the cog of society. They are remote controlled puppets without a will, programmed to serve. So when five hIE escaped a research facility, you know that trouble is brewing.

Part of the novel is available for free on Tokyo Otaku Mode.

“I believe in that smile. Even if you don’t have a soul…”

Dystopia is a two-volume serialization that tells the story of how Lacia and Arato met and their life together. It is basically the manga adaptation of the novel.

A spinoff series. Technology is fabricated as magic, and those who claim to be a user of magic are called the ‘Twelve Wisemen’. However, one day a mysterious girl by the name of ‘Iris’ appears, claiming to be a princess from another world. Is she for real, or is her story also a fabrication?

In 2014, an album called Beatless -Give Me The Beat- was released, containing 7 songs. It was produced by kz (livetune).

Other Products: I swear I don’t get any money from the Beatless producers to write this.

Beatless Introduction Set: “The true form of one with no heartbeat, hIE.” This set include Lacia’s figure and a special guidebook which serves as an introduction to the world of Beatless.

Tool for the Outsourcers: A limited set featuring a livetune CD and a guidebook. The guidebook is illustrated by redjuice and includes the anime art drawn by WIT STUDIO for the English release.

The anime will air in January 13th, 2018. Mizushima Seiji, the director of Full Metal Alchemist, will be the director. It will be animated by Studio Diomedea, whose previous works include Aho Girl, KanColle, Akuma no Riddle, and Ika Musume. The cast includes Toyama Nao, Tomioka Misako, Igarashi Hiromi, Shimoji Shino, and Amamiya Sora. Amazon will stream the series.

Looking forward to this!