Come to Thailand this past week and no doubt you’d have run into a poster of 9 Satra, the new and booming Thai animation with a budget of 230 million baht. The reason this movie is the talk of the town isn’t because of the budget or because it’s something made by Thai people. The movie itself is a real deal.

9 Satra is available in both English sub and dub. (The sub is accurate, and the dub has really good feedback, some say the ENG dub is better than the Thai dub.)

9 Satra is the story of Odd, a humble and sweet young man destined to save the Kingdom of Ramthep from Yaksas, ogres who enslaved and kill humans for no apparent reason. Odd’s mission is to bring the “9 Satra”, a weapon used with the arts of Muay Thai, to the Prince of Ramthep in order to free the kingdom. Accompanying him are the sassy&badass sky pirate caption Xiaolan, first prince of the fallen monkey kingdom Vata, and a Yaksas in exile Asura (Crimson Ogre). However, the King of the Yaksas, Dehayaksas, will not let his rule of the kingdom get shaken by a mere boy…

9 Satra is formulaic and mainstream Hollywood in its plot, but manages to be immensely enjoyable with its set of likeable cast and well-choreographed action. The movie integrated the charms of Thailand into its fantasy setting with an international touch. It is a new page for the Thai animation industry and proves that just because every previous animated movie had a crippling deficit doesn’t mean love for animation will stop.

EXFORMAT Films spent 230 million baht (7224300USD) and four years in creating 9 Satra, and many hope that they will set the new standard for other animated movies to come.

I will say it right here. I will be biased in this review, but I will tell you where I’m coming from in the section below.

The Market for Thai Animation 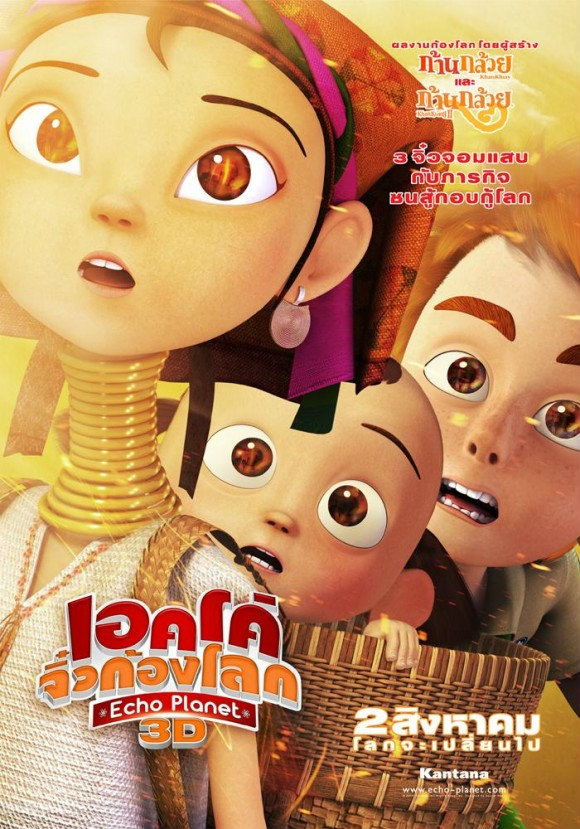 Just like I said above, Thai animated movies in the past face crippling deficit as a result of high costs and niche market. Animated movies are seen as something ‘for children’ and the only people who watch them are parents with children. Take Khan Kluay (left), or The Blue Elephant, for example. It’s the best performing Thai animated film and is the mascot known all across the country as a symbol of virtue and loyalty, but only made 98 million baht from its total budget of 150 million baht. Its sequel also made 79 million back from its 120 million budget. Another film, Yak: The Giant King (middle), only gained half of its 100 million baht budget back. Other titles have performed worst, with Adventure Planet (right) and Khun Tongdaeng The Inspirations (below, middle) making 1/10 of its budget and Nak (below, left) making 1/4. The worst in terms of profit is Ananta: Light of Hope (below, right) which had a budget of 100 million baht (3,141,000 USD) and only made 5,590 baht (175 USD). Some of them suffer from terrible reviews and some receive overwhelming positive feedback but performed badly in terms of profit anyway. Thai animators saw better use of their skills abroad, where there is a market and money to be made. The Thai animation industry falls behind in terms of skill and technology, and the small market makes things even worse. So, Thai movies generally stuck with rom-com involving transgenders or horror that we’re so good at making.

So when 9 Satra comes along, people initially went like ‘what the heck Thai people made this?’ When all we’re familiar with over here is ‘kid’s cartoon’ meant to instill some sort of virtue into the audience, 9 Satra said ‘nah we’re going further than that.’ This is why I’m so biased. 9 Satra really is good and new compared to everything that has defined Thai animation in the past. It has the global appeal that most titles struggle to strive for.

9 Satra has many strong points. One, the art is amazing. The lighting, the effects, the tattoos, the action, oh gosh it’s so well done I almost cried in the theater. Some places in the story are inspired by real places, for example, Odd’s hometown Swallow Island (pictured earlier), is inspired by Thailand’s beaches and southern islands. The story manages to integrate Buddhism into its story without the usual controversies that come with the attempt. The music is beautiful and brings out the best of each scene, hands down to the composer. The battle music are epic, and if they ever put the soundtrack on sale I’ll buy it.

The action are intense and fast-paced. Not only does the main characters have this glows to their weapons, when they moves, the glows change into streaks of light and flames, which makes it very beautiful to look at. Everything just feels so epic.

Two, the characters are charming. Xiaolan is the current talk of the town right now, and she has every reason to be. She’s clever. She’s strong. She’s badass. She’s cold and tough on the outside but lonely on the inside. She’s the pirate captain who’s excellent in steering her airship, someone her crew can place their trust on. Moreover, when she lets down her hair or play on her Guzheng, people just melt. And oh, her voice. Her voice.

A character who’s getting popular among the ladies is Odd. He’s the protagonist who is trained in Muay Thai since childhood without really knowing why he’s training, but went through with it for the sake of his paralyzed dad. He’s a humble, respectful, gentle, and down to earth guy. In Thai, his speech style is old fashioned and uh…slightly feminine? It’s not that he’s feminine but it’s more like a sweet speech style usually spoken by kind souls. It’s this speech style, plus his masculinity and playfulness that send fan arts flying everywhere. Odd also has the strongest character development in the whole movie. Initially, he’s a laid back young man who wouldn’t hurt a fly, but after learning the truth and a series of traumatizing events, he became a strong-willed warrior, but still retains his original gentleness. He is also portrayed as grateful, for he never fails to pay respect to those who sacrificed for him to get where he is.

My personal favorite is Vata, the red and white monkey prince. Despite losing his entire kingdom, the little guy is so funny he lightens the mood everywhere he goes. (I even bought a popcorn tub with his design on it.) He’s so cute with his sun allergies, but one down side is that you can’t really take him seriously in more intense scenes, even when he swears to avenge his people.

Crimson Ogre or Asura or Marata or whatever they call him is also another one with surprisingly good development. He usually escapes the radar but is an important character who actually gets decent screen time. He’s soft and wise, and is Vata’s best bud and a daddy figure.

One character that deserves to get the spotlight is Black Jager, but I will cover him in a separate post. He’s the standard villain turn ally, since his character isn’t really explored in the film. One moment you really want to kick him in the face but as time goes on, he has a lot of depth as a person. Not to mention he looks amazing in the animation even though his pictures look mediocre.

9 Satra is fun with epic animation and great characters. Not to say that 9 Satra doesn’t have flaws. Just like I said above somewhere, the story is formulaic Hollywood. We have a city under siege, a prophecy that someone will save it, and a hero and his team that saves the day from the villain who’s just a villain because the movie needs a villain. Everything is downright predictable. Also, because the original animation is over two hours long but the editor cut it down to 1 hour and 47 minutes, some scenes feel rushed and some character’s actions doesn’t really make a lot of sense. (To know the character backgrounds, you have to read the comic which I might summarize later.) Romance between Xiaolan and Odd just feels like it’s been thrown in there, although they have one really captivating scene together. Some characters are very interesting but didn’t get that much development. Action sequences are supposed to show off the arts of Muay Thai, but because it’s so fast and involves a lot of shifting camera angles, the Muay Thai in this doesn’t really come off that clear. (Aside from the bits where they exclusively focus on the different moves.)

A Brief History of Thai Animation:

Even with its drawbacks, 9 Satra is proof that the Thai animation industry has come a long way from where it started decades ago, just after WWII. In that era, cartoons are seen as useless and nonsensical, thus gaining no support from the government or the general public. The first feature length animation was made by Payut Ngaokrachang, called The Adventure of Sudsakorn (1979), the only cel-animated feature film ever made in Thailand. After two years of hard work, Payut lost his left eye in making this film. Around 1999, animated television series for children started gaining popularity, selling DVDs and spawning merchandises. Khan Kluay’s international release marks the real beginning of the Thai animated film industry, and the film is regarded is a huge success. Animated films that followed don’t make any profit in the country, but do become a hit during the time they were released. Still, animation is a small industry compared to the lakorns (drama) that goes abroad one after the other, gathering several international awards. Here is hoping that 9 Satra will be noticed internationally. I don’t want it to stop and die here in Thailand. This quality work deserves recognition.

Which leads to the question: will 9 Satra also get into a terrible deficit like all of its predecessors? On the opening day, 9 Satra gathered a whopping 20 million baht. I’ll have to wait until it gets out of theater for accurate detail on how much it made, but most people including me agree that it won’t break even in the Thai market. Despite the support it’s receiving from every Thai online media&SNS web ever, there is a slim chance they will make 200 million baht from Thai cinemas alone. All supporters of 9 Satra are looking at its run in China some time in February. Whether this will be another deficit or a success depends on how well it does in the Chinese market. Exformat films is also looking for a new distributor abroad, because of the #MeToo that came up with Harvey Weinstein, who originally will distribute the film in America. If 9 Satra manages to screen in New York, or Boston, or any international film festival…ah…I really hope!

That was my thoughts on 9 Satra and other related topics. Thank you for reading. Will you be interested in watching the film once it’s available in your region, or are you interested at all? Any thoughts? Anything to share? Let me know in the comments below!

2 thoughts on “The Legend of Muay Thai: 9 Satra Review (+ a brief history of Thai animation)”