The castle is just one long process of Yonaka coming to terms with killing her brother, Shinya. 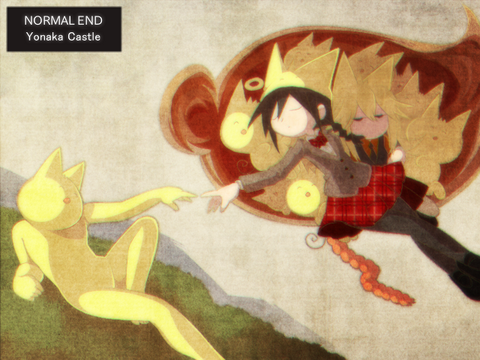 Note: the following is based on the assumption that Yonaka actually has a thing for her brother, as seen in the radio broadcast at the extra room

Yonaka and Shinya are very close since a young age. Their parents, noting their daughter’s affection for her older brother (perhaps by gut feeling) decides to send Shinya to a boarding school somewhere. Something happened (that became motive for the man to kill mommy and daddy) and Shinya developed a violent side. On the day the game takes place, Shinya is coming home for the holidays or something. Yonaka, torn between her love for her brother and the knowledge that he is a psychopath, falls asleep on the train just to have an excuse to come home late, knowing that Shinya will kill their parents. That gives Shinya time to carry out the murder. Meanwhile, Yonaka escapes into her fantasy world of Mogeko Castle to cope with the weight of killing her brother. She either kills him in self defense or get killed herself depending on the ending.

In the normal end, Yonaka is unable to come to terms with Shinya’s death and ascend to become Lord Prosciutto. Lord Prosciutto could be a way to make her feel that she has some control over her life or what happens. In this ending, she seems to trump over mogeko, but if she did then mogeko wouldn’t be telling the story to drug-induced comatose Yonaka, so IDK about that. It may just be an alternate ending mogeko came up with just to amuse himself with Yonaka’s current powerlessness. I can’t really say anything until General Hashasky comes out.

The seven Mogekos could be many things. They could be the Seven Sins (the statues surrounding the fountain) or could be the support networks that Yonaka received help from. Somewhat Strange Mogeko could be a random stranger who offered her some advice or help. Prosciutto Fairy could be a mother figure. Hasu could be a religious group. Moffuru could be a pet. Mogecuckoo could be a hobby of learning to cook. No idea what Blood Spirit could be, but he(?) has helped Yonaka in some ways.

The castle is created by mogeko, and so I think mogeko represents the mental institute Yonaka (or her parents) sought help from, but the institute was horrible and Yonaka ended up worse than when she started.

Moge-ko may be Yonaka’s suppressed violent tendencies. She is the only humanoid Mogeko in the castle and was created. This could mean that the support networks didn’t do their jobs and instead made a hidden monster inside Yonaka.

Frostyflytrap had already written a great explanation on what they are regarding to the internet, and here’s my take. I have two theories on what they can be:

1.The Mogekos are how Yonaka views society

Because of her affection for her brother, people may have sexually harassed her constantly, and because Yonaka is quite shy, that leads to Yonaka generalizing that everyone in society are the same-faced, lewd bastards. Because people think her love is “gross” or “just a phase” they may have tried to “cure” her…by the wrong means. That may have led to Yonaka’s mental breakdown.

The single Mogeko that Yonaka is implied to have a sexual relationship with is that Mogeko passively sleeping on a bed. After spending a night with the Mogeko, her ID card turns from ‘female student’ to ‘woman’. I may be reading too deep but this could mean that Yonaka is like other girls that has a sexual drive but that is her own choice, not other people’s to force on her (feminism perspective right there).

2. Mogekos are a satire of Japan’s JK culture

JK means joshi kousei, high school girls. The Mogeko may represent how adolescent girls are sexualized and objectified in the media. Not much to back this theory up, it’s just a thought.

That was it. My explanation is far from complete since I want to leave some wiggle room for when Mogeko Castle Gaiden comes out (which might not be any time soon). What do you think of the game? What do you think the whole story is about? Leave your thoughts in the comment below.

3 thoughts on “My Explanation on Mogeko Castle (spoilers)”