After the dumpster fire that was Ghost in the Shell (that I actually tried to defend) comes Alita: Battle Angel, a movie adaptation of GUNNM, or better known to English readers as Battle Angel Alita.

And hey, it wasn’t bad at all! (Aside from that I sat through that ending scene with the Zalem tube three friggin times already!)

And today’s my birthday.

Alita was a daring move after many failed manga adaptations (*cough Dragonball cough*), but it has handled it ambition well. The CGI was nothing short of amazing, and the motorball games were a spectacle to behold. Like Ghost in the Shell, I watched this in 4DX (with my dad, again) and the visuals alone was so worth the money.

Though the visuals and effects is really well-done, the plot is average. We have a strong girl fighting against a mega villain floating in the sky, and it turns out that girl is actually a cyborg from Mars. And then it becomes a tale of love, then a tale of revenge. It kind of touches on how cyborgs can love people, but Alita still has a human brain so it’s not relevant. Well, Alita isn’t aiming to be like Ghost in the Shell in terms of complexity, so it’s not a big deal.

The plot moves rapidly and is engaging. Alita flies from battle to battle and there’s no shortage of action. The romance is kind of cheesy. It makes sense why Alita would love Hugo, but that she would give her heart to him… like, what are you thinking, girl? The thing with Ido and his daughter is pretty touching, and that part where Alita calls him ‘father’ is my favorite bit. But it would make what’s to come even more heartbreaking, if this gets a sequel, that is.

It’s the pacing and the action that gives the story is enjoyment, but once the plot itself is pulled apart, it’s a combination of tropes. Some characters did not get enough screen time, especially Grewishka. Others, for example, Vector, are standard enough that they didn’t really need to be expanded upon, but Grewishka had a lot of potential. He was born in the sewers and survived the early years of his life eating whatever he could find in the sewage. He was insignificant and thrown away. If he would just say one line of ‘I was insignificant just like you’ or something along the line of Javier’s (Les Miserables) ‘I am from the gutter too’ line, that would make a whole lot of difference to a character who’s just an imaginative but goofy-looking villain. But given the time constraint, well… I don’t want to sit through another Last Jedi. That movie was way too long.

Praise be to whoever did the casting and costume, Ido and Vector seem to spring to life from the book. Murdock the Dog Master is there in all his badassery. Alita’ eyes were a daring choice, but with its brilliant visual techniques, she did not look too weird. I think.

In short, Alita is a must-see film for its visuals. The story is enjoyable, but if you’re looking for some heavy and philosophical sci-fi, you’re in the wrong place.

Alita has an ambiguous setting, so there’s one dumpster fire already avoided. But how much so are they different?

1. One issue would be that the movie skipped over Hugo’s background, where his dad’s (or brother? can’t remember) balloon was shot down when going to Zalem. That would provide reason for his fixation on Zalem that is stronger than having nowhere else to go, and would justify why he chose to go up to the city on his last moments rather than run somewhere else while waiting for Alita to come to him again. Also, during the tube-climbing, the manga Hugo seemed like he was about to lose his mind, which explains why he chose the absurd solution. In the movie, Hugo seemed to be fully conscious, and that made him come off as kind of dumb. I’m sorry, I know the ending was heartbreaking, but after sitting through it three times (manga, OVA, movie) I’m desensitized.

2. Koyomi the kidnapped baby was not there. She would probably be introduced later since she is kind of important later in the plot.

3. Jashugan didn’t look as…intimidating. If the movie is going to get a sequel (which will likely happen) hopefully he’d live up to his manga counterpart. Dude is one of my top favorite antagonist of all time, if you could call him an antagonist.

4. The movie sets up Alita and Hugo’s romance better than the manga did. In the manga, Alita kind of just, y’know, fell in love for no reason. In the movie, they have a lot more time to bond and it’s easy to see how their relationship grows.

5. What surprised me most was that they kept Hugo’s death. (Though I should not be.) I was so sure from the trailers that Hugo was gonna be le average guy protagonist who’s so innocent and is the viewer’s stand-in, but nope, they kept most of his backstory intact and he died the same way as in the manga. This is great, since that’s probably Alita’s most iconic scene.

6. I don’t have to say this, but the movie skipped a lot of content.

7. (Spoiler Warning!!!) Chip brain. Everyone from Zalem had their brains replaced with a chip. Apparently Chiren still has hers. This is kind of important, since it would be the cause of Ido’s final farewell to Alita and it’s one of the points that emphasized that wherever you are, Zalem or Scrapyard, you’re just a slave.

8. In the manga, Alita (or Gally) is actually Ido’s cat, not his daughter. It does add a nice touch to the movie, though.

What I look forward to in sequels: 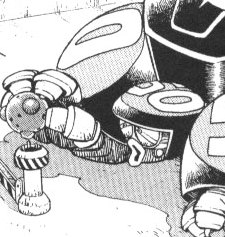 2. Figure Four (or Fogia) and his anti-cyborg fighting style, but that would have to wait a long time. Hopefully Alita’s harmonica scene would get a chance to come to life.

3. Murdock should have a spinoff dedicated to him and his quest to hunt for the one who killed his precious one. That’d make a great movie.

And to close off this review, let me tell you a funny story of how this movie is doing in my home country. I’ve complained about the upcoming elections in some of my reviews, and sorry for going off-topic. One of the candidates went to a very significant monument in Nakhon Ratchasima and mistakenly lifted up his sword upside-down, (blunt side up and sharp side to himself) and declared that his party will win the elections. Some people compared him to Alita, joking that the scene where she raised her sword in the movie is so powerful and yet look at this dude. And so the final scene of Alita became a political meme.

Okay, I seriously hope I don’t get into trouble writing that lol…the FB page that made the meme was taken down…

One thought on “Alita: Battle Angel Review – Okay, that was actually good”